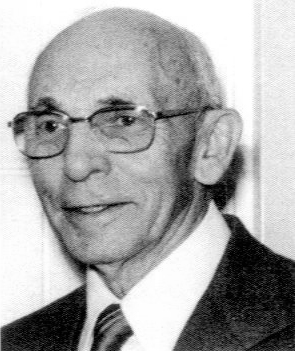 Kenrick M. Baker ('13 and '14) served as a trustee of Wentworth for 55 years. He graduated from Boston High School in 1912, and from Wentworth's Pattern Making course in 1913 and the Advanced Pattern Making course in 1914. Kenrick Baker was involved in education almost all his life. From 1914 to 1917 he was a teacher in the Boston Public Schools. During World War I he moved to Tufts College as an instructor, training Army engineers, followed by a year of service as an Infantryman in the United States Army. In 1920 Baker was elected to the Board of Trustees. He was the first alumnus to serve his Alma Mater in this capacity. In 1929 Baker was appointed director of the Vocational and Adult Education Program for the Brockton Public Schools. He retired from teaching in 1964. During his working years he was active in local, state and national educational organizations and the Brockton Historical Society of which he was the first president. Baker was president of the Wentworth Institute Alumni Association from 1920 to 1923. Kenrick Baker was named as one of the first recipients of the Gold Leopard Award for outstanding service to the Institute, the community, the state and the nation.